How would you feel if you divided our lives into some phases according to the important events that happened to us, and if you produced works that reflect the emotions you experienced in these phases? The story of Özlem Akman’s works produced with felt is one of the clearest answers to this question.

Özlem Akman, who has been working with felt, which is mostly known as a textile material in the geography we live in, will present her works to art lovers with an exhibition to be held for stray animals. The exhibition to be held in cooperation with İzmir Social Development and Business Cooperative SKOOP and EGİAD At EGIAD Social and Cultural Activities Center in Konak Izmir during 16-17-18 May awaits its visitors.

We are sure that everyone who reads these lines will find a share for themselves in the story of the emergence of the works. Although Özlem Akman does not want to call herself an “artist” and her works a “work” this is the story of all of us…

Saying “I divided my life into stages”, Özlem Akman started the art of felt by making faceless dolls. So why didn’t the dolls he made have faces?

Actually “faceless babies” Waldorf Philosophy It emerges from a teaching called education. We have all seen these “expressionless” dolls, most of which are made of cloth, at least once in our lives. The reason why Özlem Akman started to produce these dolls with felt is the kind that will warm your heart:

“I have divided my life into phases because with each important event we grow a little bit bigger. Of course, having a child is the thing that raises us women the most and also scares us the most. This is the first phase. However, in this exhibition, you will not see what I did in the first phase, because I never intended to exhibit them during the period I was doing -with the effect of the feelings I had. I gave some as gifts and kept some for myself. Because it reminded me of a very important time. When I gave birth to my son Bora in 2016…”

Even if a child is unlike anyone else, would you stop loving them? Let’s get the answer to this question from a mother:

“At that time—it was very interesting to think about now—every acquaintances who came to the house tried to make the child of our neighbor look like something. Actually, I was doing the same thing, here it is”The eyes are the same as me, the feet are the same as his father, he got his hair color from his grandfather”… Then I said to myself, “Yeah.”

“While I didn’t tell anyone about all this so it would be a shame, I took my felts to my workshop and started to draw faceless babies and families… Because if we didn’t shape them, they would still be ‘little creatures to be raised and bonded with with great love’ in our eyes for life. That’s it with scary feelings I started making a lot of babies. These dolls, called Waldorfs, may have had many philosophies, meanings, but they had only one meaning to me.”

“If we didn’t get underfoot one more time, our children would emerge as much healthier individuals. That’s why I didn’t compare Bora to anyone. Whatever you look like me my only duty is to be a motherI would love him no matter what.”

However, in this exhibition, not dolls and human figures made of felt, but animals that should have a say in nature more than we do come across. So why?

This period, which Özlem Akman calls the “second phase” in her felt works, concludes with the founding of BORART, an art initiative named after her son. However, his work during this period was actually locking us all in our homes and permanently changing the world It starts with the pandemic. For this reason, “The second phase actually wasn’t very funny.” says Akman and adds:

“We watched doctors, nurses, science and the whole world fight outside while we tried to fight an invisible enemy in our homes. We even saw how small this world is and how insignificant we are, so all of us are depressed. Maybe one year ago, while everyone was sending messages to each other saying world peace, we couldn’t even go out for tea in front of the door. We were in a very sad state, there was nothing to laugh at, because death is nothing to laugh at (probably).”

There was a very meaningful connection between the pandemic and animals that not everyone could see. While we were closing in our house in fear, nature began to come to its senses: 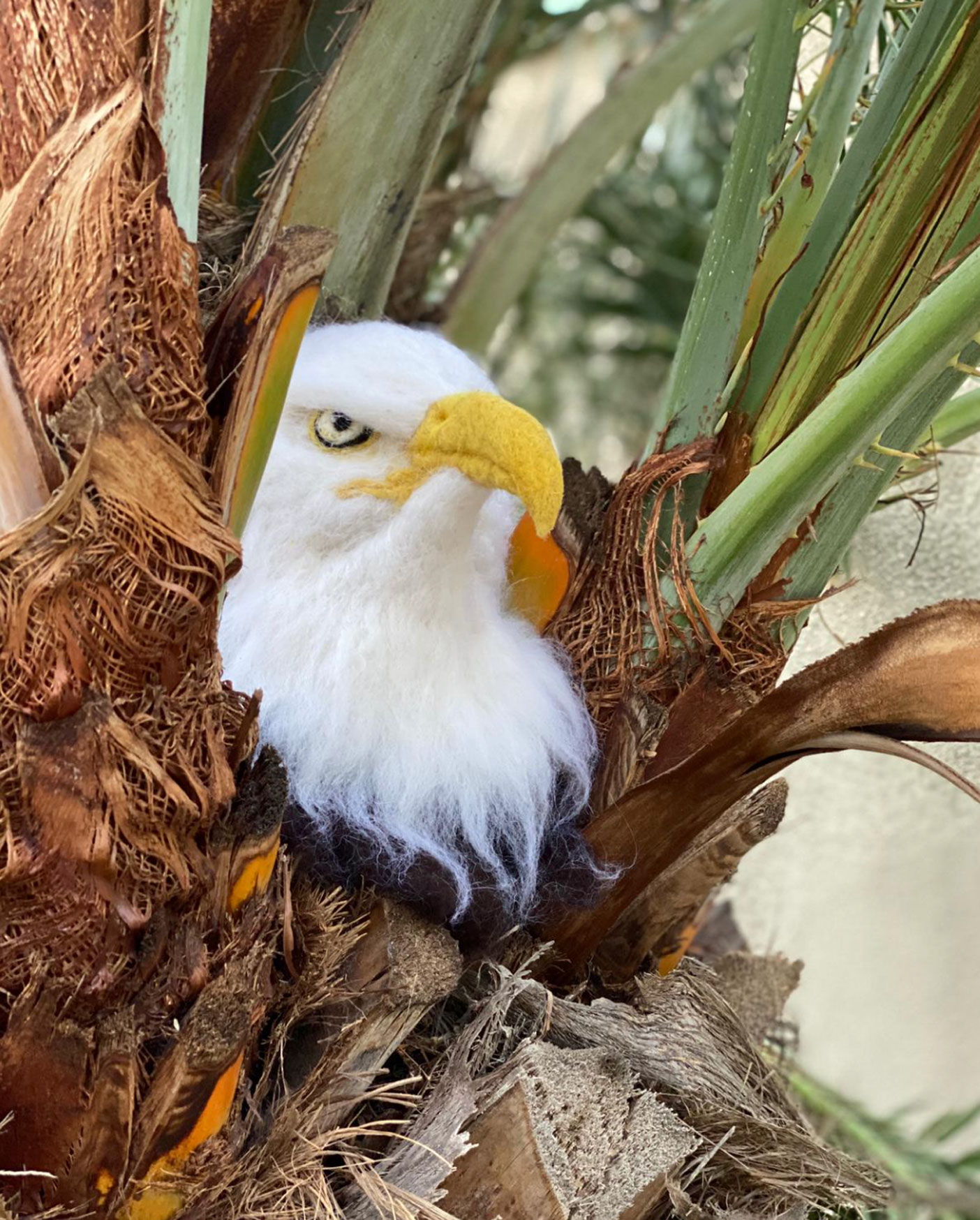 You remember the days when the new normal was no longer new. As we got used to the absence of our lost freedoms, nature was actually free. A series of variants that were terrible for us were no longer so terrible for nature. According to Akman, we are all in this period. “from the normality of being human” we went away:

“I think being afraid to hide in our homes was the scariest part of the job, because all our freedoms were taken away from us. We are far from normal. When I say normality, I am not talking about mediocre normality, but the normality of being human. When our greatest luxury was to look out the window, of course, I used the luxury of looking out of the window a lot, and something caught my attention there; nature had come into its own. The colors were brighter, the sky was bluer, the green was greener… In fact, I saw how undesirable we are in nature and how forced we exist. It was painful to witness, but it was nothing new.”

In this exhibition, animals that most of us cannot see with the world’s eyes first turn into felt figures and then into a very strong representation of “women”… 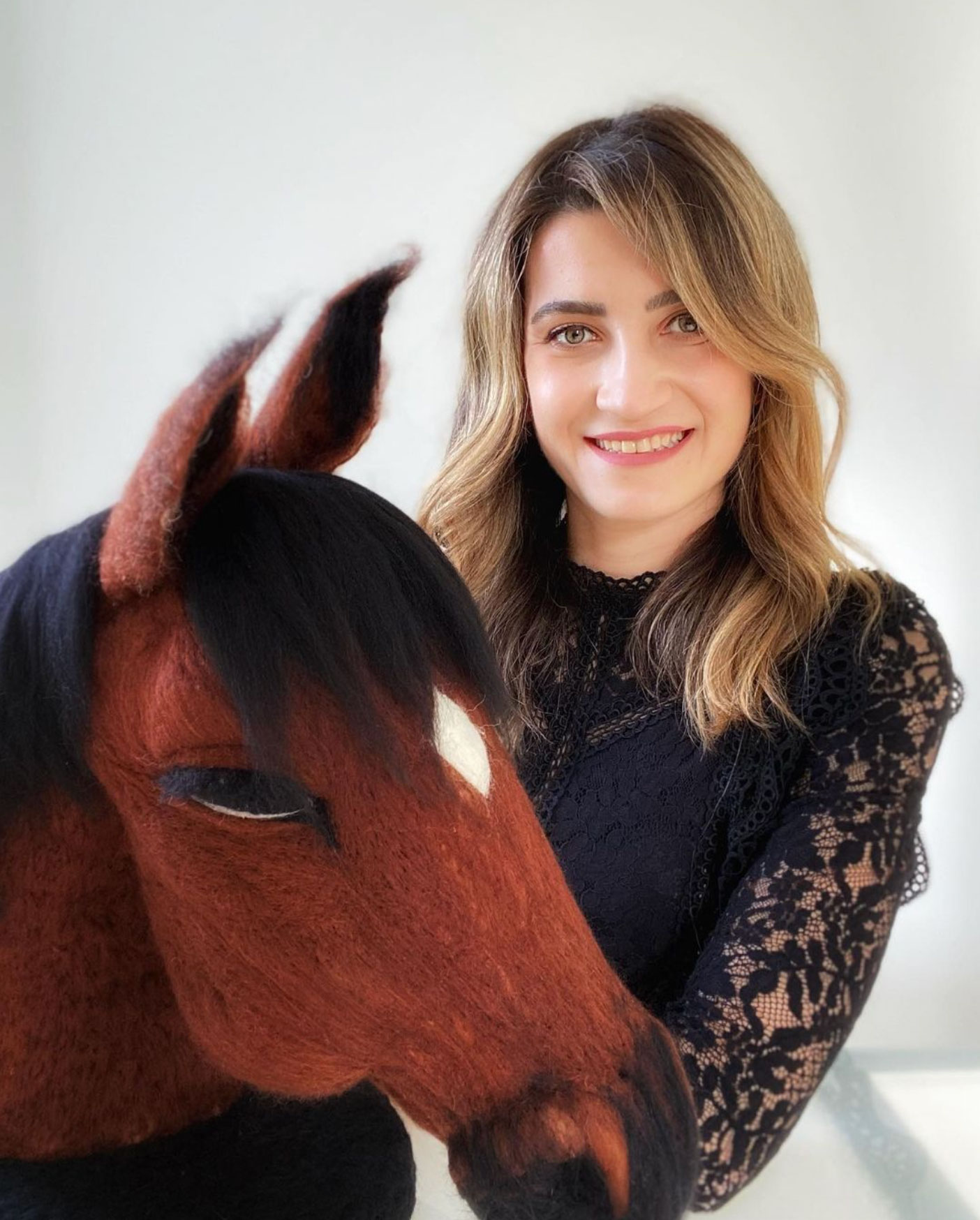 While describing her works to be exhibited, Özlem Akman mentions that “in fact, there are many strong and special women in the soul of every woman”, excluding men. the animals we share the world with departs:

“As a humanity that transgressed our limits, it was very normal for nature to want to vomit us while doing all kinds of damage to the sea, greenery and everywhere else. I realized that we also forget about our true partners, man is a selfish creature. However, there were animals in this nature that were at least as entitled as us, perhaps more deserving. However, since we usurped everyone’s space and right, of course, we were the most unwanted creature.”

“I wanted to sit down and give to nature what I got from nature and I started to make animals, but I realized that I had never seen the animals that came out of my hands with the eyes of the world before. While I was thinking about why I am doing these things, I realized that my work actually had a meaning. It was us women.”

“A lot of strong and special women live in the soul of every woman. A mother whose child you harm turns into a lion just like this…” 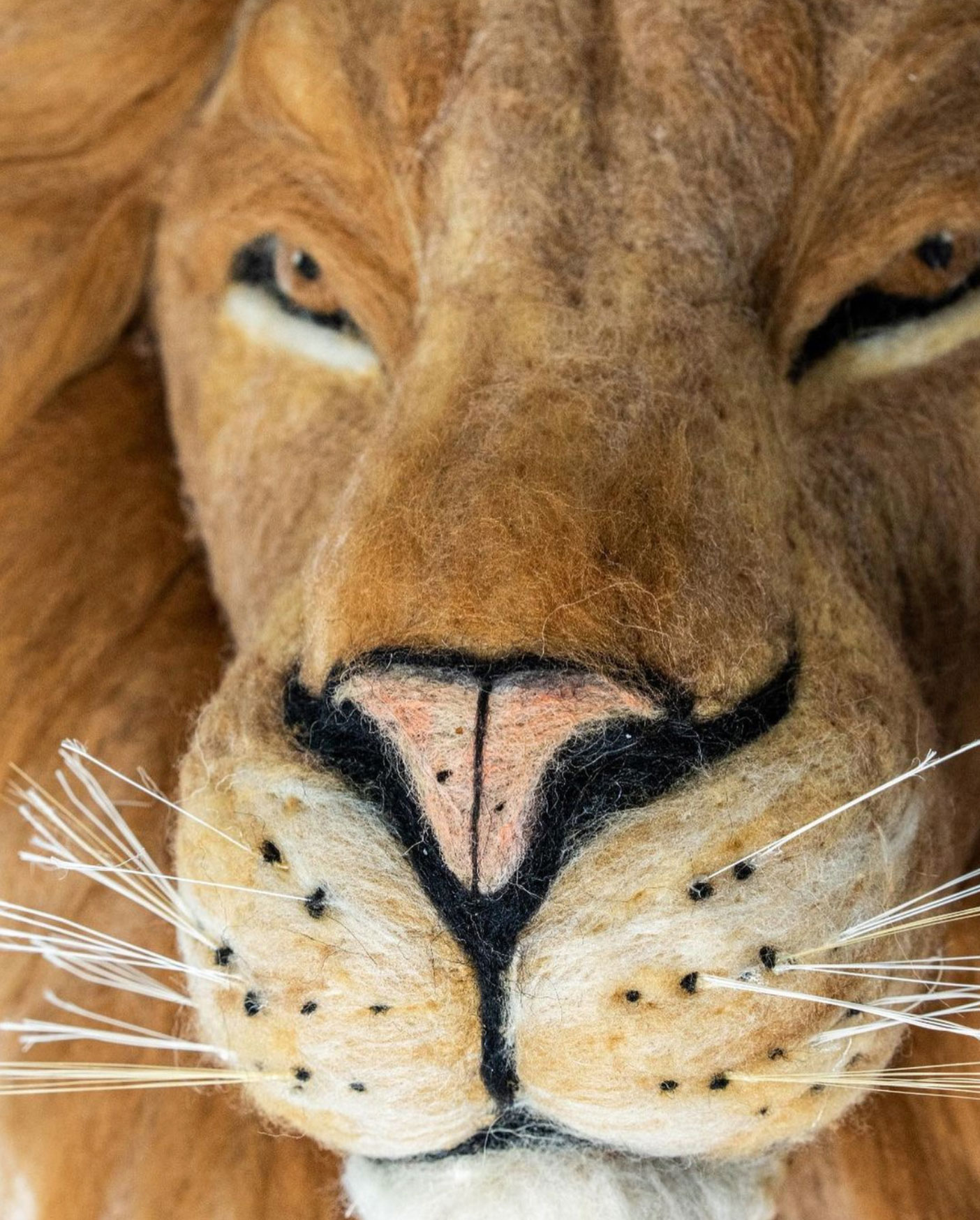 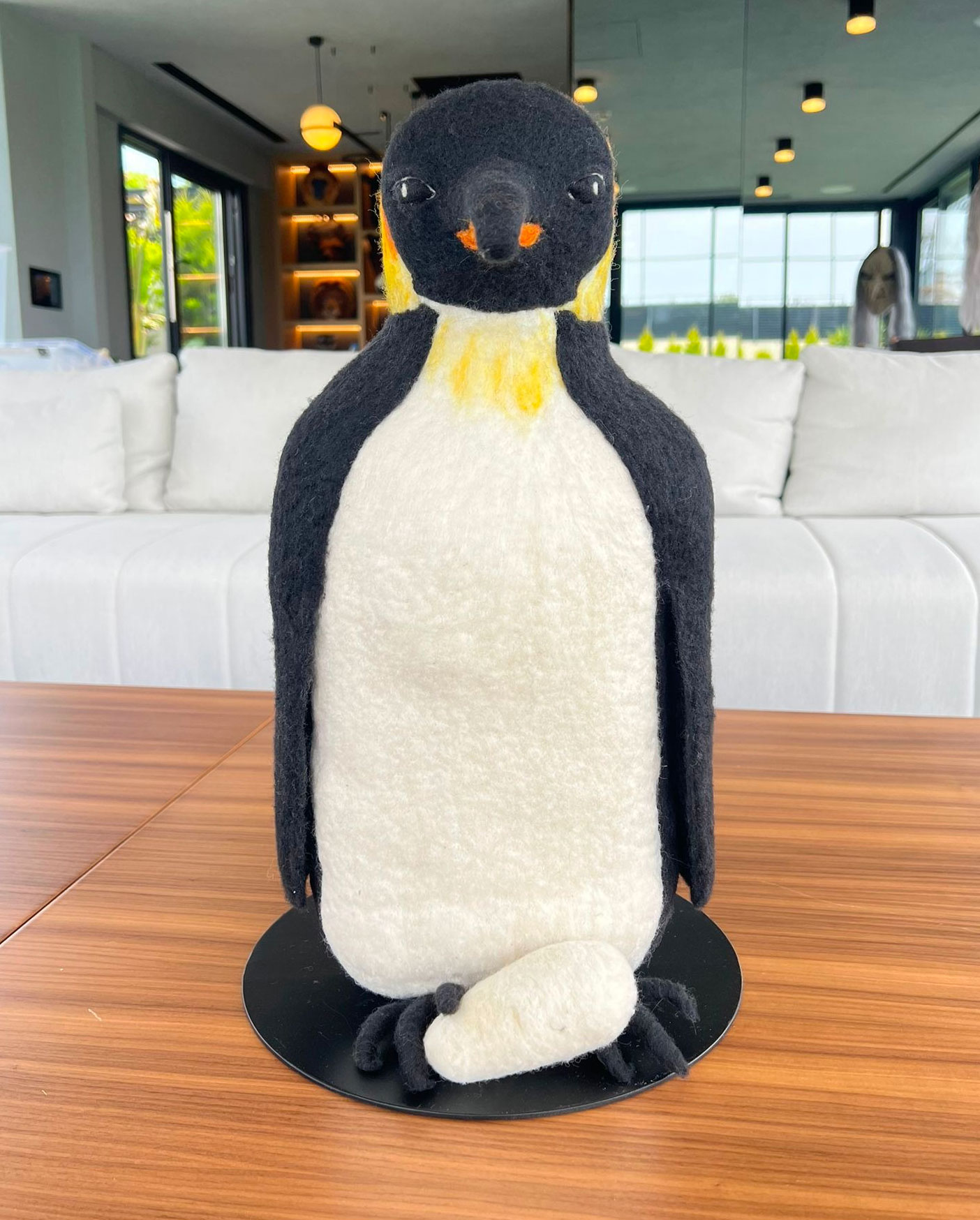 “In the life of a repetitive woman, I realized that we were so bored trying to suggest the same things every day, and I dreamed of horses, running in an endless green with a terrible sense of freedom…” 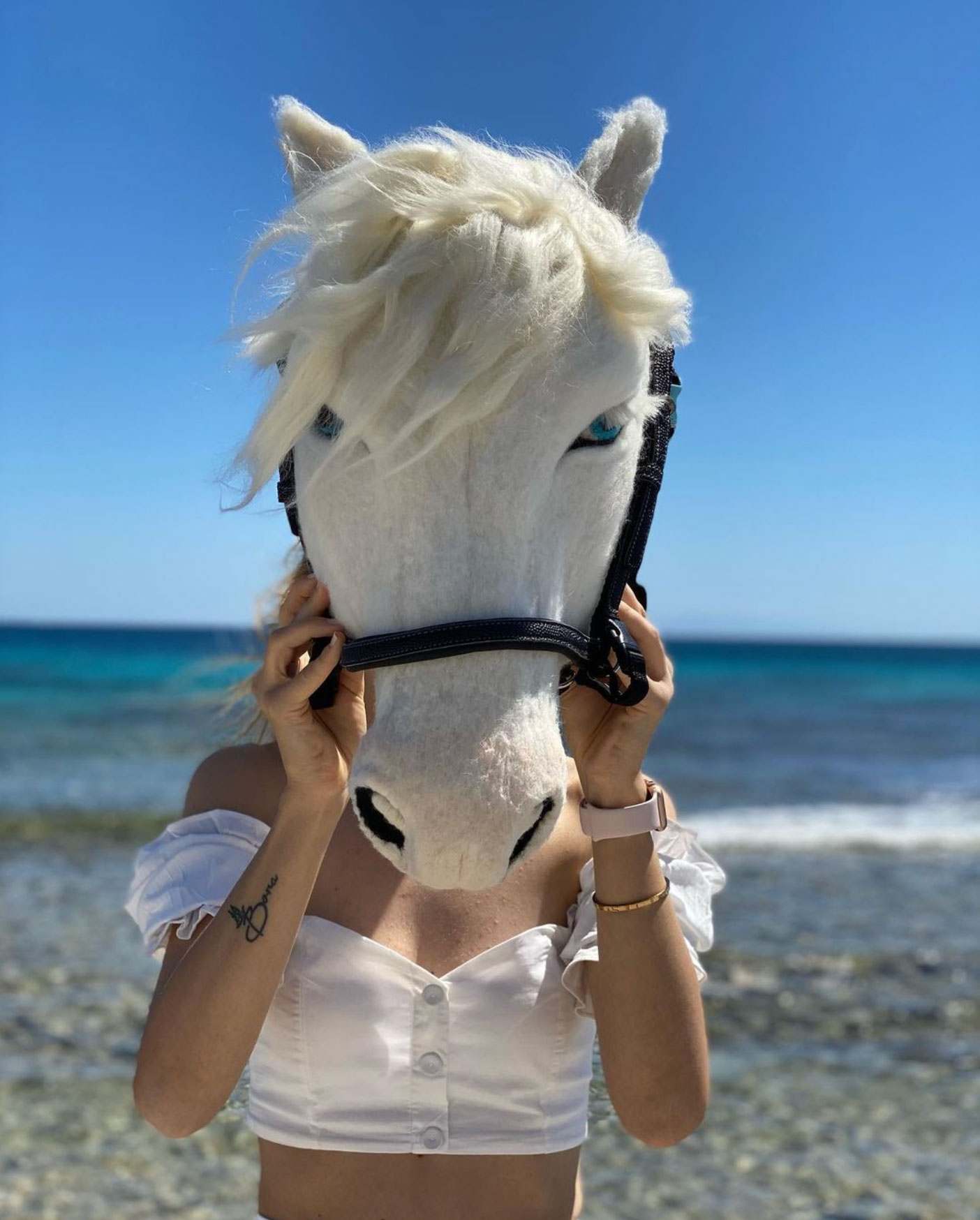 “The most beautiful were the birds that everyone should know how to love; because if you squeeze too hard, they would die very quickly. They had to be very sheltered, very sensitive.” 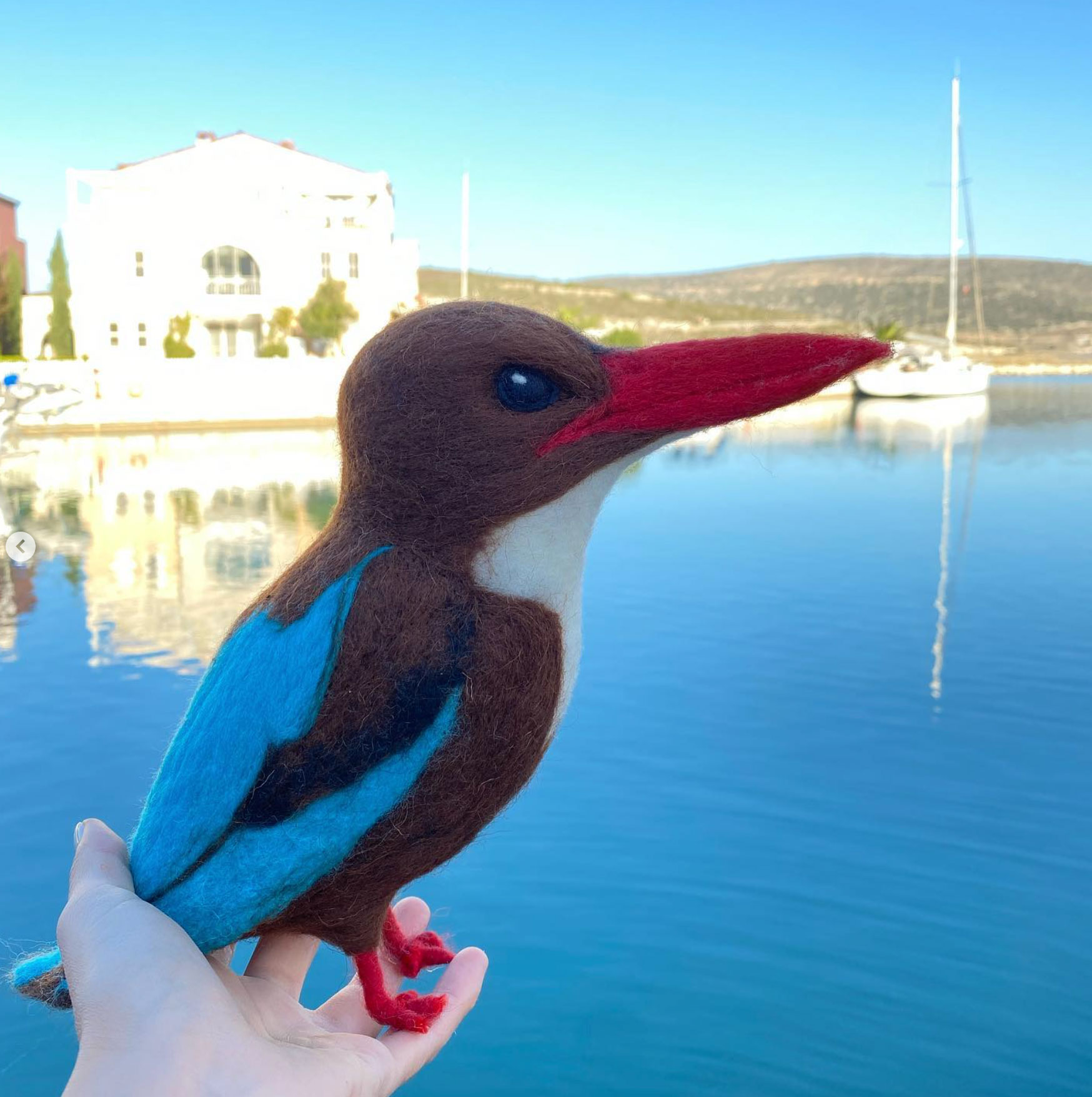 “Motherhood is truly an art; His raw material is a son, he has processed it with great responsibility, and he has prepared it for society as a free individual without comparison…” 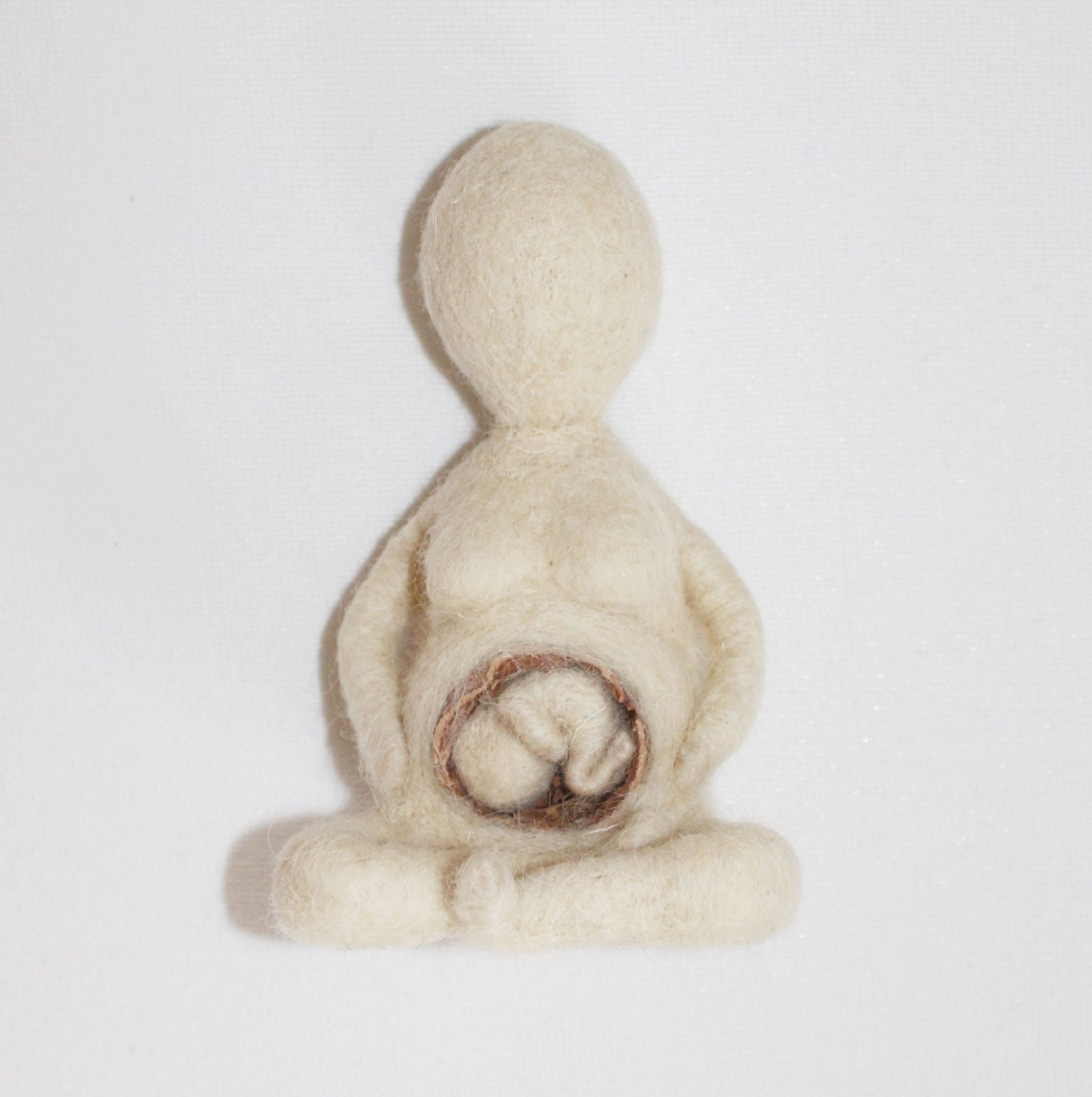 Ozlem Akman’s Felt & Animal Busts Exhibition, which will be held to support stray animals, awaits its visitors at EGIAD Social and Cultural Activities Center in Konak, Izmir on May 16-17-18. You are all invited! 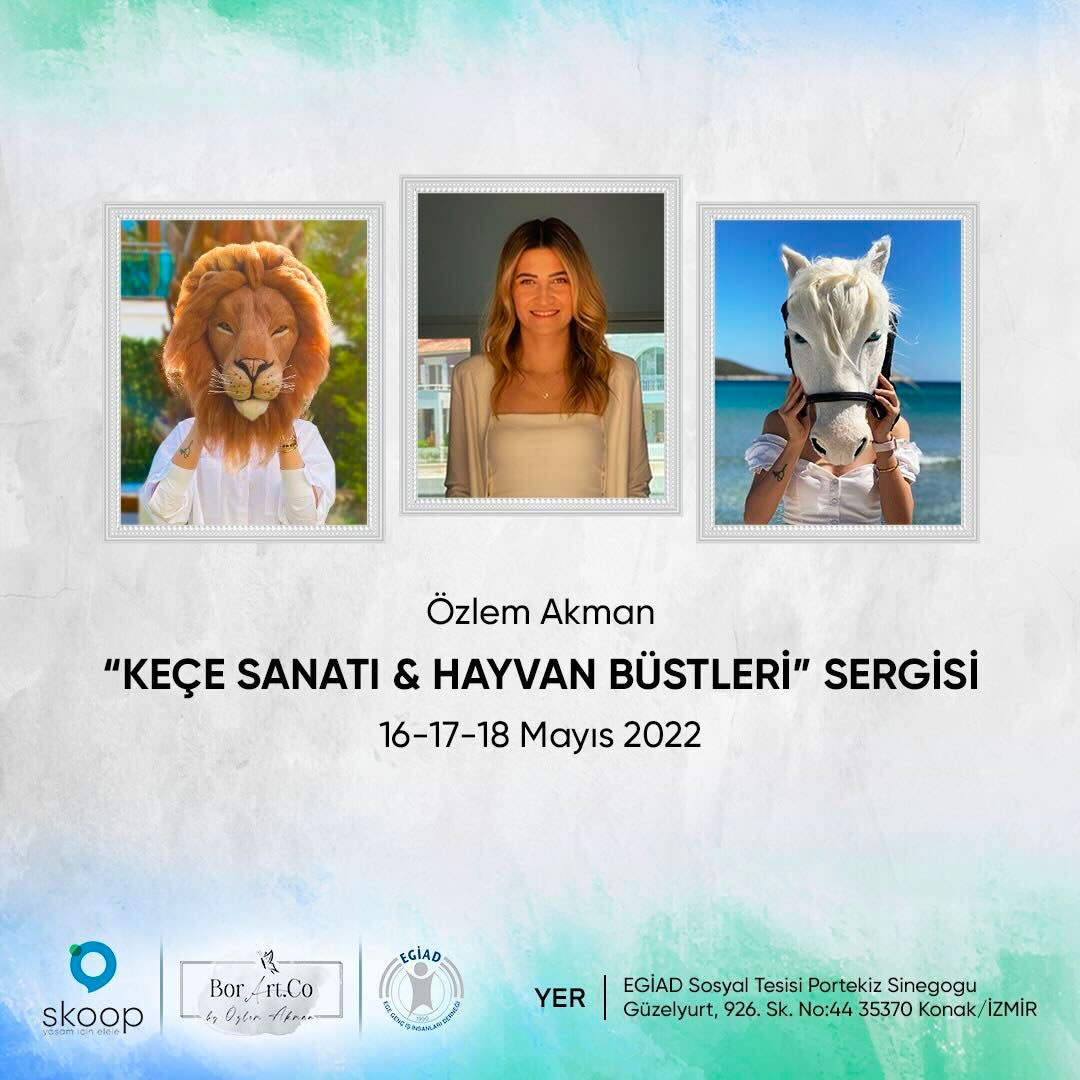