Being the boss used to be easier. Managers used to be able to exclaim annoyed: “Is it still okay, Müller?!” Now it has to be: “Dear Mr. Müller, I have a feeling of being disturbed.” to train as a forest bathing therapist, it is important to promise a benevolent examination – you won’t find a replacement anyway. And then there is Sebastian Dettmers, head of the online job exchange Stepstone, and postulates: “The most important job for managers is to communicate clearly.”

Phew, that sounds exhausting! It’s no wonder that fewer and fewer young employees want to take on managerial responsibility, and more and more prefer to pursue a specialist career. As early as 2021, the strategy consultancy Boston Consulting Group (BCG) predicted that Germany would be short of around 341,000 so-called “top executives” by 2030.

The Handelsblatt has searched – and found: In our weekend title, reporters Tanja Kewes and Claudia Panster present 30 candidates for promotion to the top tier of management in German business. Who are these potential CEOs of tomorrow? What is driving this generation of managers? How do they want to be challenged, supported and led, how do they lead themselves?

There is, for example, Sopna Sury, 48, who, as head of the hydrogen division at RWE Generation, is dedicated to what is perhaps the biggest future issue in the German economy. Your current lighthouse project is called “Get H2”, starting from Lingen in Emsland, Sury is to build a hydrogen infrastructure for energy, industry, transport and heat.

The manager represents a whole group that enjoys leading and doing – and also manages the required balancing act between respectful and at the same time clear communication, usually without feeling disturbed.

The CP regime in Beijing is increasingly maneuvering itself into a trap with its zero-Covid policy. The number of corona infections in China has risen to its highest level since the pandemic began. On Thursday, the National Health Commission reported 31,444 new infections for the previous day.

The number of cases is increasing particularly sharply in the metropolises of Beijing, Guangzhou and Chongqing. The capital Beijing is reminiscent of a ghost town, in other parts of the country millions of people are completely in lockdown. And that in year three of the pandemic – while many other countries have long since lifted most of the corona measures.

The problem for the communist leadership: they should actually react with even tougher measures to really contain the outbreaks. But that can no longer be sustained given the large number of cases. At the same time, the regime cannot admit that the Chinese corona policy has failed.

Do you remember? In 2020 and 2021, quite a few people in Germany praised the zero-Covid policy as an alternative. When I look at China, I can only say: It’s good that we were spared that. 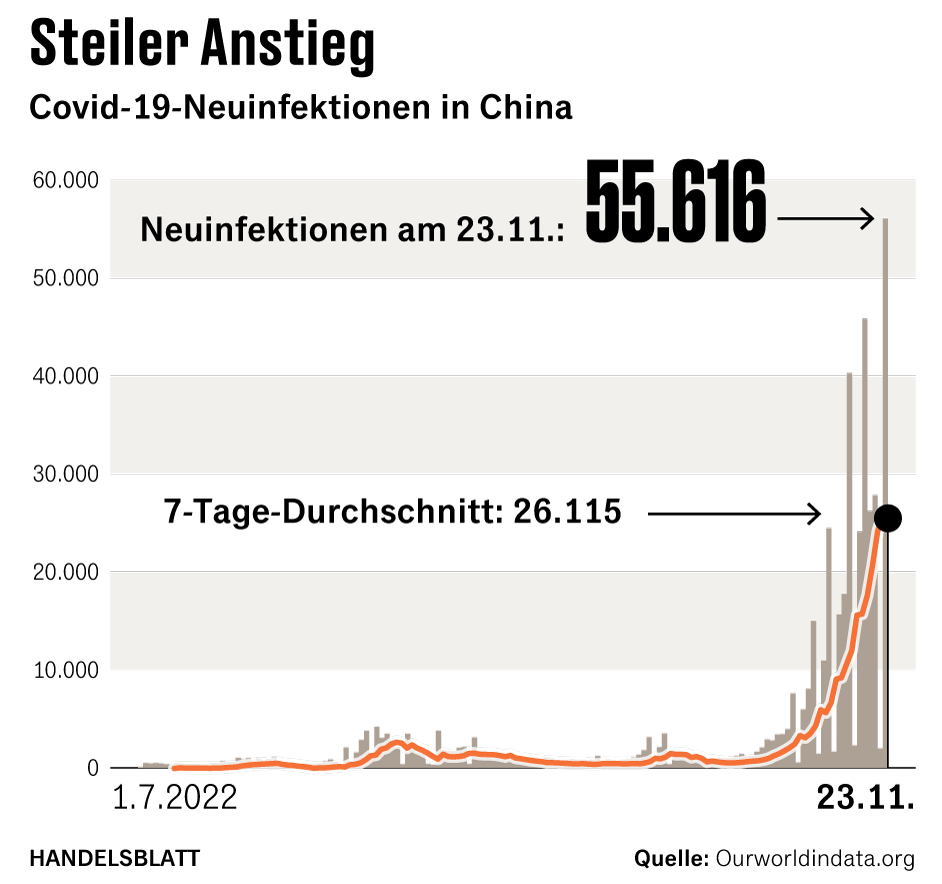 Ukraine is going through dramatic days. Russia wants to wear down the Ukrainian population with repeated attacks on residential areas, power plants and railway systems. After particularly violent attacks on Wednesday, parts of Kiev were still without electricity and water on Thursday evening. Cherson, which has just been recaptured, is under Russian artillery fire – according to Moscow’s interpretation, the Russian army is killing its own citizens there, because Russia had annexed the Cherson region.

An important factor that has ensured Ukraine’s survival so far: the Russians have not been able to gain air sovereignty over the country.

Under the impression of the Russian terrorist attacks, Ukrainian President Volodymyr Zelensky made it clear: Nothing changes in the war goal of liberating the Crimean Peninsula, which was annexed by Russia in 2014. He told the Financial Times: “If someone shows us a way to end the occupation of Crimea through non-military means, then I will be very much in favor of it.”

But if a proposal meant that Crimea would be occupied and remain part of Russia, “no one should waste their time on that.”

Most Western supporters of Ukraine assume that Ukraine will eventually be able to recapture the areas occupied by Russia since February 24, as well as the Donbass. But they are more cautious about Crimea: the peninsula is strategically and symbolically too important for Moscow to give up without further escalation of the war.

Flixbus connects the rural regions and brings young and low-income target groups with them for the ticket. Schwämmlein: “It’s about additional income for the state in the millions, which can be generated with the integration of the long-distance bus in the 49-euro ticket.” There is definitely positive feedback from politics here.

A local transport ticket, which is also valid as a nationwide network ticket for the green long-distance buses, would actually be very attractive. But I wonder how such an offer for 49 euros a month is supposed to pay off. Maybe with the 49-euro ticket there is only a discount on the tickets for the green buses?

And then yesterday evening gave us the evidence that nobody should underestimate the capabilities of older, unemployed professionals. Soccer Methusalem Cristiano Ronaldo, 37, has been without a club since leaving Manchester United. But in what is now his fifth World Cup, he and his Portuguese national team offered the most thrilling game of the tournament so far, a hard-fought 3-2 win over Ghana.

Okay, in order to be able to convert the penalty to 1-0, Ronaldo had to go down in the penalty area at the right moment. But it is precisely this practical knowledge that makes employees so valuable in the autumn of their careers.

I wish you a day as powerful as a converted penalty.